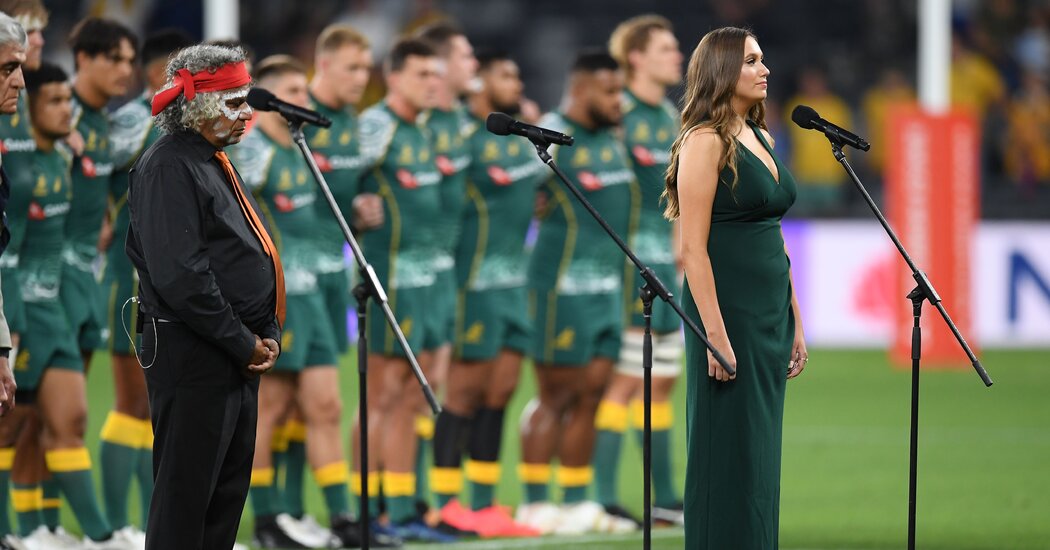 The lyrics of Australia’s national anthem have been altered by one word to recognize the country’s Indigenous history, Prime Minister Scott Morrison announced Thursday.

Until Friday, the song began: “Australians all let us rejoice, for we are young and free.” But as the country celebrated the beginning of the new year, the “young” was dropped. The anthem now describes the country as “one and free.”

“Australia as a modern nation may be relatively young, but our country’s story is ancient, as are the stories of the many First Nations peoples whose stewardship we rightly acknowledge and respect,” Mr. Morrison, who leads the Liberal Party, wrote in an opinion piece for The Sydney Morning Herald.

“In the spirit of unity, it is only right that we also now acknowledge this and ensure our national anthem reflects this truth and shared appreciation,” he added. “Changing ‘young and free’ to ‘one and free’ takes nothing away, but I believe it adds much.”

The move was supported across the political spectrum. The opposition leader Anthony Albanese, of the Labor Party, said the country “should be proud of the fact that we have the oldest continuous civilization on the planet right here with First Nations people,” according to the BBC.

The anthem, “Advance Australia Fair,” was written by Peter Dodds McCormick in 1878. It became the national anthem in 1984, replacing “God Save the Queen,” and the first line was changed to make it more inclusive of women — “Australia’s sons” became “Australians all.”

Critics of the “young and free” lyric said it suggested that the history of Australia began relatively recently, perhaps with the federation of Australia on Jan. 1, 1901, or the raising of a British flag at Sydney Cove on Jan. 26, 1788. That event is officially commemorated as a holiday, Australia Day, but some Indigenous activists refer to it as “Invasion Day” in recognition of the Aboriginal and Torres Strait Islander people who have been living on the continent for more than 60,000 years.

In recent years, the controversy surrounding the anthem has repeatedly been sparked in the places where the song is typically performed: sports arenas. In 2015, the Yorta Yorta soprano singer Deborah Cheetham declined to sing the anthem for the Australian Football League’s Grand Final in Melbourne.

“Our national anthem tells us that we are young and free,” she wrote in an essay for The Sydney Morning Herald. “Blindly, many Australians continue to accept this.”

And in recent years, a number of Indigenous Australian professional athletes have refused to sing, or stand for, the anthem before games or matches, including the boxer Anthony Mundine and the rugby players Cody Walker and Josh Addo-Carr.

In November, Gladys Berejiklian, the premier of New South Wales, supported the lyric change from “young” to “one” and told the Australian Broadcasting Corporation that “it’s about time we recognize the tens of thousands of years of the First Nations people of this continent.”

“We’re tens of thousands of years old when it comes to human inhabitants,” she said. “It’s just a small gesture.”

The Sydney Morning Herald also backed the idea in an editorial on Nov. 11. But it added that “symbols are not a substitute for action, such as a change in the federal constitution to create a Voice to Parliament as outlined in the Uluru Statement from the Heart.”

The Uluru Statement From the Heart was a 2017 call from Indigenous Australians that the government enshrine a First Nations voice in the Constitution. That could mean that a body of Indigenous Australians would have a voice in Parliament and be allowed to offer input on legislation and policies affecting them. Mr. Morrison rejected the idea of what he called a “third chamber” of Parliament.