“A War I Saw Unfolding Firsthand.” Héctor Tobar on the 30th Anniversary of the LA Riots 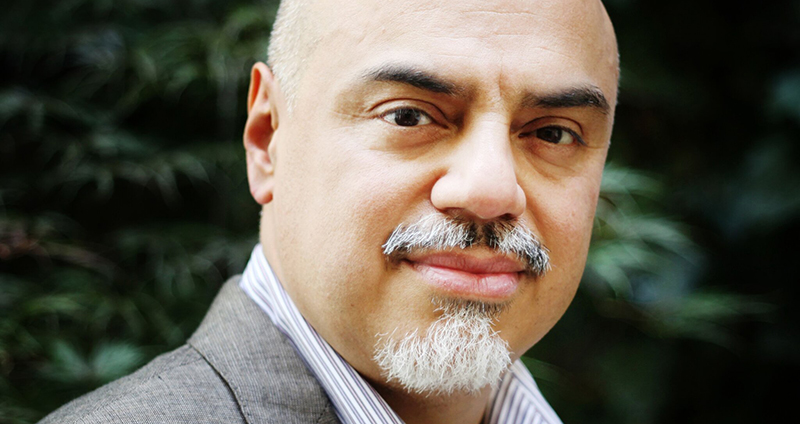 Novelist and journalist Héctor Tobar joins Fiction/Non/Fiction hosts V.V. Ganeshananthan and Whitney Terrell to talk about the articles he wrote on the LA riots both as they took place in 1992 and this year on the 30th anniversary. Tobar also reads from his 2020 novel The Last Great Road Bum, and discusses how his fiction writing and journalism have informed each other.

Check out video excerpts from our interviews at LitHub’s Virtual Book Channel, Fiction/Non/Fiction’s YouTube Channel, and our website. This podcast is produced by Anne Kniggendorf.

V.V. Ganeshananthan: You call the LA riots, and I’m quoting you here, “A war I saw unfolding firsthand.” You’re talking about the lack of a political program. That doesn’t mean, of course, that the violence didn’t have causes, and that was one of your driving motivations to write about this—that you wanted people to understand.

You also wrote, “But I wanted them to see the Los Angeles that I knew and lived in, a city where people lived in tense coexistence, but coexistence nonetheless.” And I wonder if you could just talk a little bit more about that.

Hector Tobar: Well, you see, when I was asked to write this piece on the anniversary of the riots, an editor there, Ismail Muhammad, suggested that I write about Long Beach, Wilson High School. He had heard that there had been a riot at the school, before the actual Rodney King verdict came out, in the hours of the day before. That turned out to be incorrect.

But when I looked at Wilson High School—which did have some incidents that took place after the verdict—when I looked at the yearbook, I saw this incredible spectrum of faces, of races, of ethnicities. This had to be one of the most ethnically diverse schools in Southern California, and thus, in the United States. They had large numbers of Southeast Asian students, they had a lot of Mexican immigrant students, many white students and Black students.

And so to me, this particular school became this symbol of the LA that was, this LA where all these different kinds of people have been brought together, which is, of course, the story of Los Angeles, and the story of most American cities. They are places where different races and ethnicities, different nationalities, encounter themselves. And that’s basically been the story of the United States since its founding.

And so, to me, the way we all sort of dealt with each other in the months and years before the riots, and the lessons that we learned from the riots, that’s a great story that has not been told. It has many nuances to it. Black and white people at this high school, and in the city of Los Angeles, lived next to each other. They started families together, in many cases. They worked with one another. There was a certain kind of cooperation you would see in everyday life, at the same time that there were these underlying grievances that come from American history, or from our personal lives, these grievances that have to do with just being humiliated by racism, humiliated by the caste structure of the United States, right?

A city like Los Angeles has castes. Latino laborers are part of this underclass of the city. And so that larger story is a really complicated one. It takes the subtlety of a novelist, it takes the novelist’s eye for detail and for personality and for character. And that’s part of what I tried to do in my work in this piece for The New York Times Magazine and also in my work in general.

Whitney Terrell: Your term of “tense coexistence” reminded me of a term from Ralph Ellison. He uses the term “antagonistic cooperation” to talk about the way that the races in America work together when they’re working together. And that was what was striking to me about the piece. You don’t skirt or de-emphasize the divisions and injustices behind the riots, but the life at Woodrow Wilson High School turned out to be much more complicated than just that this was a terrible thing that happened.

And the thing I like about Ralph Ellison is that Ellison does the same thing; he’s able to see, he’s able to talk about the possibilities of America while also talking about its faults. I think we don’t get to hear a lot about the possibilities of America anymore. Mostly we are talking about its faults. Terrible things are happening now. The President tried to overthrow the government. We have a tremendous number of racists who are running the Republican Party. There are all kinds of things that are wrong. But there are things that are possible in America.

There’s a reason why we care that these things are happening incorrectly in parts of society. And that reminded me, you talk about in this piece the memory of the hope and potential of what you call the “peculiar ways that Angelenos construct multi-ethnic lives together.” Was that how you expected the piece to turn out? Were you headed there? Or was that where you found yourself after you looked into the high school?

HT: I think that one of the great, untold truths of being a journalist is that journalism involves a great deal of imagination, because you have to imagine the story that you’re going to find. You have a hypothesis of what you’re going to find. So as soon as I saw this yearbook, which I was able to access online, the class of 1992 yearbook from Wilson High School, and I saw all those faces, I thought, there’s a story there. There’s a story of these people living together. And so my questions were geared toward uncovering the daily rhythms of life.

And I had tons more stuff than what I was able to get into the New York Times piece. Where specific groups of people would hang out on the campus, and how they would sort of encounter one another. One of my favorite stories was told to me by one of the African American members of the football team, who talked about this incredible bonding on the football team between the Black and the white players, but also how that bonding did not extend to their personal lives. As soon as the football game or the football practice was over, as soon as they left the locker room, the field, he felt these separations as strong as ever.

And so to me, that being drawn together and still sort of being pulled apart, that tension back and forth, that’s the United States and race. So many stories of white students learning about racism by seeing the inequality, for example, in police stops. I interviewed a young woman, who was part of the stoner Dungeons & Dragons crowd, rock and roll, death metal crowd, who described…

WT: I should have hung out more with that crowd when I was in high school. I missed out on that.

HT: Yeah, and she would describe being stopped by the police for pot and how they would just sort of take her pot and throw it away, and how she would see what happened to her African American friends or her Latino friends or Mexican American friends when they were stopped by the police. And so for her, growing up at that high school was a great lesson about how race worked in America. So people are learning those things.

One of my favorite interviews was with this Vietnamese immigrant student, and he talked about learning how America worked, and feeling that everyone in the school accepted him. And just being completely confused about what was going on with Rodney King, not understanding that at all. And so yeah, to me, it’s really wonderful to enter into these spaces and describe their intimacies and their confusions, their realizations, their misunderstandings.

The Last Great Road Bum • Deep Down Dark • The Tattooed Soldier • Translation Nation • The Barbarian Nurseries • “The L.A. Riots Were 30 Years Ago. I’m Still Trying to Understand Them,” by Héctor Tobar • “COLUMN ONE : South L.A. Burns and Grieves : Life has been hard in the neglected area for years. But now, as self-inflicted wounds mount, residents fear for the future,” by Hector Tobar and Jonathan Peterson • “Tape of L.A. Police Beating Suspect Stirs Public Furor,” by Hector Tobar and Leslie Berger